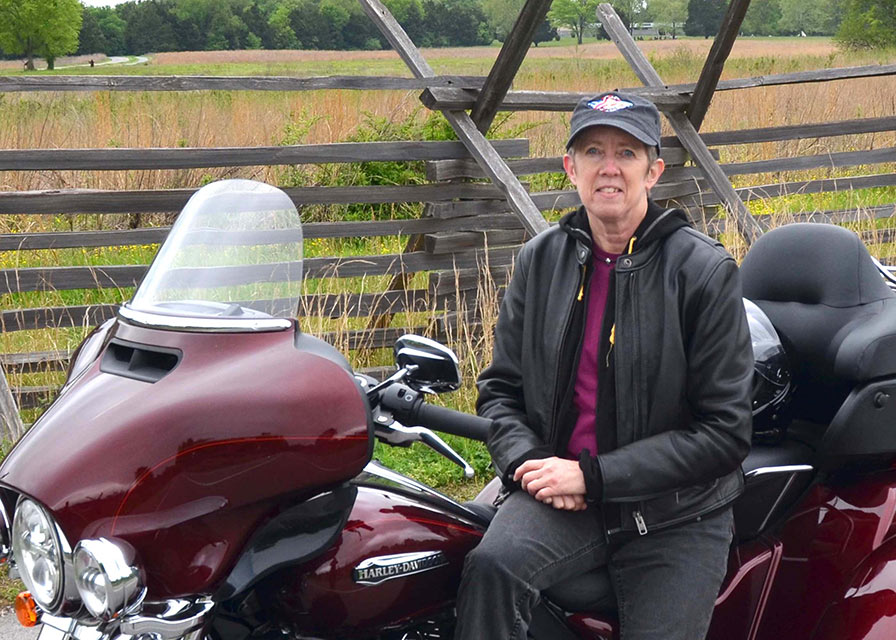 Debbie McDonald was born in Macon, Georgia, Aug 22, 1959, and grew up in the small town of Reynolds, Georgia.  She lived there until she married Johnny McDonald in 1977, and they moved to Cochran, Georgia.  She has one daughter and three wonderful grandchildren.  Johnny and Debbie moved to Tennessee in 2014 to be closer to their grandchildren.

Debbie began a long career at Robins Air Force Base in 1977 and retired in 2012 with 35+ years of civilian service.  She has a master’s degree in Information Systems and has long been interested in computers, technology, and photography.  She began working with the quilt ministry (Peace*Love*Quilt) at The Glade Church in 2015 and now enjoys quilting for the ministry and family.

Debbie and Johnny both rode motorcycles during their younger years and bought small bikes in 2008 to take on camping trips.  That sparked a more serious interest in motorcycles, and they both soon moved up to larger bikes.  They went to Rally to Ridgecrest for several years in search of Christian motorcycle activities and that’s where they first became aware of the F.A.I.T.H. Riders Motorcycle Ministries.  They were active in the Friendship Baptist Church, Warner Robins, GA, chapter until they moved to Tennessee, where they are now active in The Glade Church chapter in Mt Juliet, TN.

Debbie became the National Merchandise Director in May 2014 and began managing the merchandise store virtually from her home in Tennessee.  Last spring, the inventory was also moved to Tennessee, and now she manages all store functions from Murfreesboro, TN